Tonight’s CMLL Super Viernes was, and I shit you not, the best Super Viernes since Star Jr. and Valiente won the Gran Alternativa about a month ago. So why does it still feel like I wasted my time watching this show tonight? That’s because CMLL has pulled off the impossible; they’ve put on a solid show that still found a way to be frustrating as hell. There were good matches that should’ve been better. There were rudo performances that hogged the spotlight more than Jack Nicholson in Batman. And of course there were still shit matches because it wouldn’t be a CMLL show without, you guessed it, shit matches. Ergo this better than usual CMLL show was still below par. Let’s review it now!

If ever there was a CMLL match that should’ve made New Japan go “you know what…maybe we need a new partner in Mexico!”, it’s this one. Holy shit was everything about this all wrong. There was only one luchador worth a damn in this match sports fans and the booking proved CMLL was completely oblivious to the fact that it was Sonic. The young luchador carried things early in the match just on effort alone, only to then give way to some completely lazy offense from the rudos (Espanto used the same finisher twice to win two different falls!) and showcase spots for Retro. RETRO! To think that CMLL looked at the two luchadores on the technico side and thought Retro, a guy who couldn’t turn on a guitar amp without supervision, was the star. In the words of Daniel Osborne, that pretty much sums it up. This match sucked.

If you’ve seen one CMLL Luchadoras match recently than you’ve seen this one; the technicos started strong, Team Dalys then controlled the rest of the match and Dalys stood strong at the end because of course she did. As such this match was pretty much everyone going through the motions with the exception of Shoko Nakajima and Reyna Isis. I’m not surprised Nakajima was good; I was surprised however to see her and Reyna work well together, with Reyna even surprising a bit by how well she based. She has been improving no doubt but these sequences, to some degree, were the first signs that she could be better than aggressively mediocre. Then again maybe Shoko is just that good. We’ll never know for sure because Shoko is heading on out of here and it’s probably all for the best. She had several matches for CMLL, was good in all of them and it never made a difference because the rest of the division is a dumpster fire. This match was no different.

Finally…FINALLY! It took a long ass time but for the first time in weeks, this match revealed signs of life in Arena Mexico.

To be honest, this wasn’t even that great of a match. It was a really good match no doubt but it won’t go down as one of the best lucha libre matches you’ll see this year. That’s not what’s important though; what is important is that for the first time in weeks we got a match where the luchadores actually seemed to care about having a good match and performed accordingly. Could it have been a bit smoother in spots? Sure. Could Okumura have been replaced by anyone else? Absolutely (although his presence was understandable given this was the match Tiger Hattori refereed). But in this case I won’t complain that much because this match featured honest to Grodd effort and was a good time. Hechicero looked great, very clearly trying to impress the New Japan higher ups. Kawato returned with a solid performance. Okumura didn’t get in the way. And all three technicos had strong nights, with Dulce Gardenia overcoming a few sloppy moments to impress yet again while Atlantis Jr. and Audaz looked terrific. That’ll be a big relief for Audaz especially after his horrible performance a week ago. Again, not a great match and I’m probably overrating it a tad because it was better than anything CMLL has done in weeks. But that doesn’t change the fact I enjoyed it greatly. A fun trios match!

A lot of people seemed to not like this match. Maybe the last match being good broke me but I’m not sure why this match was loathed. It certainly wasn’t great but it was nowhere near terrible and actually told a decent story. Ángel de Oro worked really hard and delivered some cool dives, Felino actually did a cool move for the first time in years (a nice Sunset Flip Powerbomb off the top) and the final minute was really well done with Felino trying several times to cheat, getting caught each time and then getting beaten at his own game when Oro successfully cheated to win. CMLL certainly does dirty finishes far too often but most of the time they make no sense, which is why they suck. This finish made perfect sense and thus came off really well, at least in my book. I don’t know if I need to see this match again and I really don’t know if I need to see Oro vs. Felino in a hair match, but this was perfectly acceptable for a Lightning Match and better than I expected. Then again I expected nothing so…

This match was peak CMLL sports fans. They simultaneously found a way to have a match that was better than expected while still disappointing us at the same time! When it comes to this sort of thing CMLL is like Faith here.

Let’s start with the good stuff; this match got a lot of time, all three technicos looked really impressive (especially Titán, who was half Dragón Lee, half Fenix in this match) and the Dinamitas finally looked motivated during this match. That’s all good. The problem is that, once again, the match was a little too Dinamitas focused as we went along. You could see it coming after the technicos won fall one (the first mistake this match made) and all I could hope for after the Dinamitas won fall two was that they’d cede control back quickly. Instead they went on for forever with some admittedly very good offense before giving the technicos a few spots…and then beating them. I won’t go as far to say the Dinamitas are becoming like Dalys like some people did, but this was yet again proof that Cuatrero, Forastero and Sansón are more interested these days in making themselves look good than they do helping their opponents. It was good to see them motivated and fortunately the technicos did a good job all by themselves…but man, imagine if Cuatrero, Forastero and Sansón had actually been trying to help them! This match would’ve been killer; instead it was “good.” I won’t complain too much about that seeing how the rest of CMLL has been recently but boy was this a missed opportunity. In other words, it was a Dinamitas match in the back half of 2019.

This match felt like it was actually going to do it. It felt like we may actually get an honest to Grodd great match on a CMLL show. And then it ended in two falls.

What can you do sports fans? I guess CMLL decided this match needed to be a set up for something next week, which would’ve been fine if CMLL had shown enough consistency to have Soberano and Negro Casas cut promos (you know; the two guys involved in the finish) after the match instead of Volador and the UG (you know; the two guys not involved with the finish). Up till that point they were rolling. The rudos did the exact opposite of the Dinamitas in having control while also letting the technicos do stuff, Soberano looked great, Mistico looked great and Volador’s new choker headband look was pretty chill. Oh and he was also solid as well. With another fall this could’ve been something. Alas we’ll never know because CMLL had to end it early. Yet another main event that summed up the entire show, a show where CMLL was so close to something good…and yet so far away.

And on that note I’m off to watch Buffy fight kids possessed by hyenas. Good shit. TILL TOMORROW! 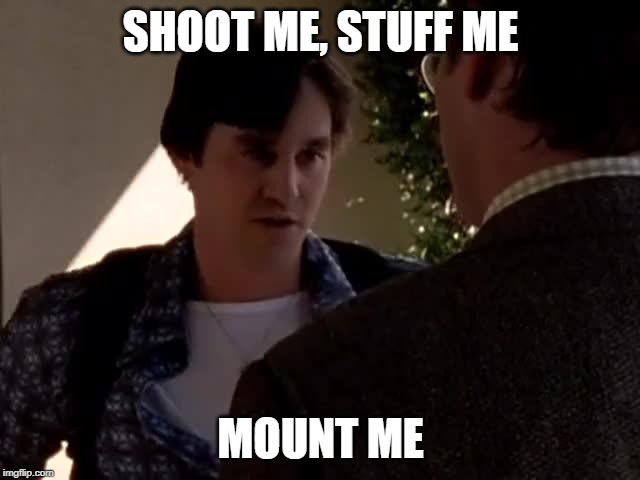 Looking forward to people not knowing the context of this and being weirded out!